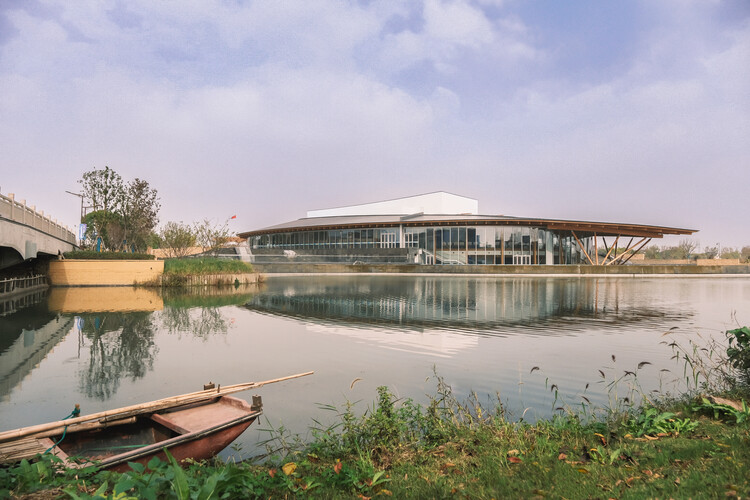 Overview. Located in the southeast of the intersection of Zhongxing Road and Zhenguan Road, Xitang Town, Jiashan County, a two-story wooden structure exhibition and conference center has been built. The project faces the south-natural water system of Shili Port, which connects the millennium historic town Xitang to the west, and then connects the origin of the Yangtze River Delta – the Watertown Parlor to the east. Closely adhering to the development theme of “Integration” and “High Quality”, the project positioning emphasizes creating an internationally advanced green building benchmark with Jiangnan features. The project floor area is about 12,800㎡with both large and medium-sized meeting rooms, reception, exhibition hall, parking lot, and outdoor activity areas, which can accommodate about 500 people for a conference, exhibition, and research activities at the same time.

Concept. Uphold the design concept of “floating leaf ” to practice the “low carbon, energy saving, green and sustainable” construction goal, and integrate times and culture to highlight the beauty of the Jiangnan area and long-standing cultural heritage. “For the memory of Xitang town, the long corridor is an essential element”. The composition of architectural space is the inheritance of the spatial vein of Xitang ancient town, the long corridor of Xitang is the inspiration source for the large curved roof from the building to the space, and the three-meter-long overhang roof embraces the surrounding water, which is a modern interpretation of the misty rain corridor. When walking in the corridor, people seem to pass through a century of misty rain in the Jiangnan area. The entire building is presented in the image of a skiff, which is channeled through the enlarged water surface of Shili Port in the south, just like a ship starting to set sail, inheriting the “Red ship culture” of Jiaxing.

Site. The design concept of “creating mountain and water landscape” in traditional gardens is the inspiration source for the arrangement of elevation and the relationship between water and land of the surrounding site. Water is the source of the beauty of Jiangnan. The circular water embraces the building and presents its reflection, demonstrating an intimate relationship similar to that of Xitang ancient town and water. The water system of Shili Port is enlarged and concave inwardly on both sides of the building and reproduces the pier in the ancient town. The architecture and nature realize perfect integration, and a natural place with undulating mountains and rivers on the flat ground is created. The waterfall landscape on the large steps is integrated with the natural water surface of Shili Port, and the three landscape stones are inspired by the traditional “one pool and three mountains” concept. The three elevated steps at the northwest corner entrance bring an abstract representation of the ancient town’s arch bridge steps and create a kind of momentum of overlooking. Walking up the steps, people can see the multi-level planting square unfolding in turn. The large steps, large canopy, large curved roof, and glass skylight along the axis are the embodiment of the traditional central axis and order.

Space. The embedding of box-like large and small conference rooms and VIP rooms in the building is a translation of the folk house in the ancient town. The spatial structure of the ancient town features the design of corridors around and courtyards connected to the interior. The tour that unfolds around the main entrance becomes increasingly fascinating, while outside the window, the scenery unfolds gradually from the plants to the water. When reaching the bow of the ship, the visitor is already on the second floor, whose view is further lowered to the water’s surface by the infinitely extended eaves. Walking down the steps, the mood and the scenery become suddenly clear. The deck, waterfall landscape, and building outside the window integrate with nature perfectly at this moment.

The timber frame in the large and small meeting rooms is also derived from the prototype of the traditional wood structure of Jiangnan halls. The low ceiling, high side windows, and inner courtyard between the loop corridor and the large meeting room convey the enjoyable beauty of the garden space in a traditional house. The use of daylight and green plants to embellish the heavy solid building is the unique beauty of oriental architecture that is different from western architecture.

Order. The structure order of the corridor is controlled by four tangent and symmetrical circular arcs, The short north-south arcs are divided by 9 and create small spans of 15°, and the long east-west arcs are divided by 10 and create small spans of 4.5°. The arrangement of glass curtain wall, metal roof panels, roof multi-ribbed beam layout, and the triangular roof truss of the small meeting room are also further subdivided on this basis. The structure of the large conference room is derived from a uniform grid of 1.8 by 1.8 meters, the 12 timber and steel trusses of an 18-meter long span are supported by the east and west gables, and the timber and steel tensioned beams with a spacing of 1.8 meters are erected longitudinally in the big hall.

Structure. In terms of the construction material, the traditional “wood” and “stone” are inherited, and the modern timber structure is used to interpret the traditional large woodwork. The inner ring of the circular roof gradually rises around the beam from south to north, which is a modern interpretation of the traditional “lifting and folding” construction method, the outer eaves naturally form a curve from low to high and then gradually fall, and a beautiful curved roof is created through simple rules. The structure system of the large conference room is a modern translation of the traditional Chinese timber structure, the gable murals are interspersed with wood columns, implying the column and tie structure, and the trusses raised according to the section and the secondary beams erected between them imply the post and lintel structure, thus forming a meeting space with the atmosphere of the traditional hall.

On the basis of the arc truss beam, the small conference room arranges a triangular roof truss every 4.5°. The different roof truss forms of the large and small conference rooms fit with the traditional wooden hierarchy. On this basis, the structure is integrated with the roof lighting and equipment pipelines, the wood truss becomes the back frame of the side skylight, and the evenly arranged slotted beams with an 8cm slot at the middle, where the pipelines of fire sprinkler, lighting fixtures, and other equipment pipelines are arranged.

Cart
Cart - $0.00
Main Menu
Have an account?
Login
or
Register