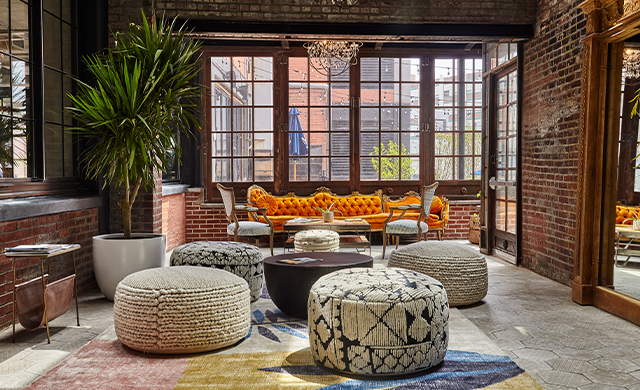 Located in the buzziest neighborhoods, co-living offers permanent lodging, plenty of perks, and opportunities for interaction in well-appointed spaces priced lower than most studio apartments. Designed for all ages and professional backgrounds, these hospitality-inspired communities may just transform home life in the same way that coworking spaces changed the way people make their living. Here, we check in with leaders from five companies that are innovating the sector.

Necessity, as they say, is the mother of invention, and that was the case for Reza Merchant, who was living in London when he realized there was a need for a new housing model. “Cities are incredible places to live, but they can be overcrowded, expensive, and lonely. There was a real lack of housing that was of a decent quality but also affordable,” says the company CEO, who founded the Collective to solve those problems by “combining quality, accessibility, and flexibility with community and a sense of belonging.” Indeed, members of the Collective live in beautifully designed private studios equipped with a kitchenette and an en suite bathroom. The common areas are equally well-considered. The Canary Wharf location in London, for example, offers a swimming pool and spa, a chef-style communal kitchen, a VR golf simulator, and a gaming room. Original art commissions can be found throughout the building.

“Contributing to the development of a future model of living, that I myself had been longing for, was incredibly enticing,” says Thomas Downes, who joined the Collective in 2019 as head of interiors. His concepts expand on Merchant’s vision to create a nontraditional structure that encourages people “to work, live, and be with one another,” Downes says.

This human-centered approach focuses on “the role society and community can play in fostering genuine happiness and wellbeing,” he adds. For instance, the Collective Paper Factory in Long Island City, New York is deeply aligned with its Queens location via a contemporary lens that still honors the century-old building it inhabits.

With plans to launch in Miami, Chicago, and multiple London neighborhoods, Merchant is guided by the new urban consumer, who “is looking for flexibility, quality, value for their money, and community where they rest their head, no matter how long they need to be there,” he says. “Co-living delivers all of that and represents a real challenge to the status quo of the traditional flatshare or hotel.”

Some ideas take time to germinate while others reveal themselves immediately. Within 45 minutes of touring the site, Ministry of Design’s (MOD) founder and director Colin Seah knew exactly how he wanted to convert a former Singapore shophouse into Canvas House. His inspired idea for the co-living space was to blanket the entire 3,800-square-foot interior in white.

Guests, Seah says, should see the space as a blank canvas for their personal journeys within it. “We can imagine they will live out the drama of daily life and begin to fill their suites with more personal elements and belongings,” he explains. “The canvas is meant to be just the beginning and provide a backdrop for the future.” The three-story building and roof garden is the family home of Fang Low, founder and CEO of Figment and developer of a collection of intimate co-living homes in Singapore that includes Canvas House. Growing up in a shophouse in the Tanjong Pagar area, “having my home be plugged right in a vibrant neighborhood was something really special for me,” Low says. He established Figment in response to the cookie-cutter new developments that greeted him upon returning to his native Singapore after studying and working in the U.S. “I wanted to facilitate more meaningful face-to-face interactions,” he says. “I truly believe that community starts from home.”

While the pandemic has temporarily paused Figment’s expansion plans, Low is now looking at ways to transform the common areas of his 12 houses into coworking spaces. “It was never our intention to create an adult-style dorm,” he says, noting each house maintains a comfortable density that never goes beyond six individuals. 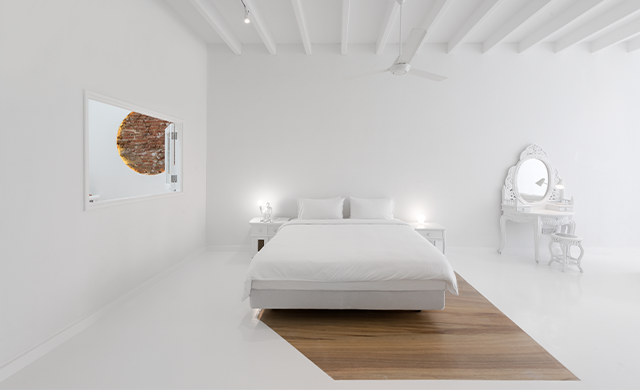 “Figment is doing something innovative with its boutique co-living concept,” he says. “We remain committed to curating homes that have a sense of place and offer a refreshing take on city living that celebrates Singapore’s local art and built heritage.”

“Affordable housing is one of the biggest problems in Los Angeles,” says Haven Coliving executive chairman Ben Katz, who previously founded online banking company Card.com. “People are stuck with either a long commute or an uncomfortable shared living situation that’s not optimal.”

In response, he created Haven Coliving, along with business partners Ari Chazanas and Robert O’Neill, as a concept that celebrates the way we live today with an emphasis on wellness and community. 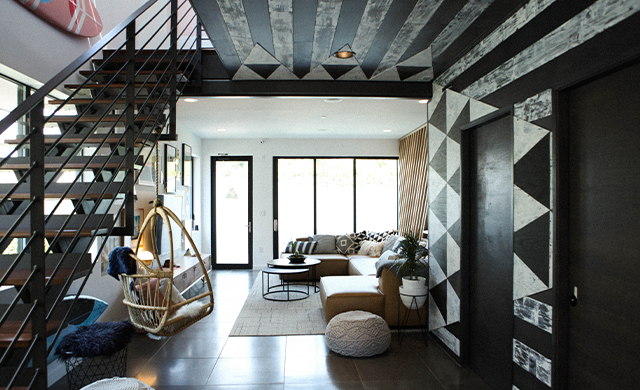 Debuting in Venice, California in April 2019, Haven’s mission of purpose-driven living is reinforced through its goal to make cities accessible, inviting, and empowering. While a studio apartment in Venice can cost up to $3,000 per month, Haven charges its members a flat monthly rate of $995 to live in one of six multimillion-dollar mansions designed by Charles Infante, a production and interior designer. The pilot community generated 6,000 applicants for its first 100 membership spots.

Think of it as a dorm room for adults that includes a Japanese-style sleeping pod in a shared bedroom and access to a gourmet kitchen, coworking area, well-appointed gym, yoga studio, and movie theater—not to mention programming such as cooking classes and TED-style talks. “Our residents are reducing their cost of living to the point where they can get ahead of their bills for the first time,” Katz says. 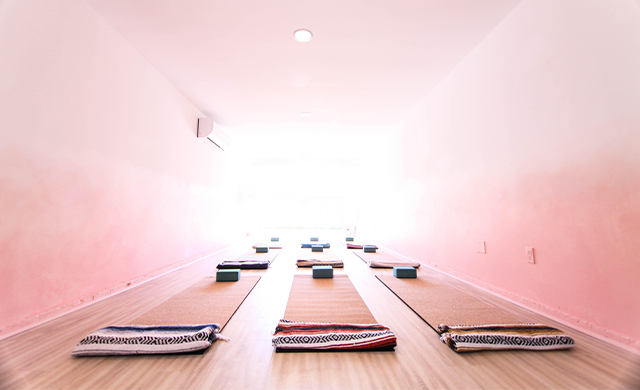 Cost and amenities are not the only benefits, he adds, noting the community shares a passion for health and wellness, mindfulness, and kindness. On weekends, it’s not uncommon to find Haven residents conversing in the hot tub, jamming on an acoustic guitar on the roof deck, playing video games, or doing group fitness classes. Two former members even went on to get married, he says.

Currently, the rapidly growing outfit is expanding to Los Angeles neighborhoods West Hollywood and Echo Park, with plans to enter other high-cost cities throughout the U.S. “People are resetting their social networks and getting a positive energy boost from like-minded people,” Katz says. “These are amazing spaces.”

Indeed, the 34-story tower features an 11th-floor pool deck, numerous coworking-style lounges, a chef’s kitchen, a gym, and F&B outpost Peacock’s that also serves as a concierge station—only a handful of luxe amenities in the 639-unit building.

Shear credits “timing, luck, and the crash” for leading him to his current role at PMG, and for the past 15 years, he has played an instrumental role in the company’s success, managing a portfolio of more than $4 billion in real estate assets across the country. Maybe that’s because he loved the role “from the first day I walked into the shop,” he says. Among those is the recently opened X Miami, a 464-unit multifamily social community that’s pioneering a similar rent-by-room model for city dwellers and urbanites. 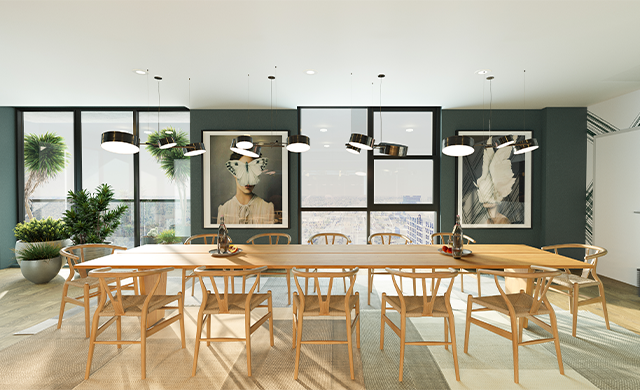 Society Living naturally formed from this concept. Unlike most luxury residential buildings, nearly one-fifth of Society Las Olas’ two-, three-, and four-bedroom units are fully furnished and can be rented by the bedroom. “The entry point is hundreds of dollars less than a new Class A building down the street,” Shear says.

He worked closely with New York firm Workshop/APD on a “friends with amenities” concept for the public spaces. “We want people to get away from their phones and enjoy life with other people,” says design director and senior associate Andrew Kline. 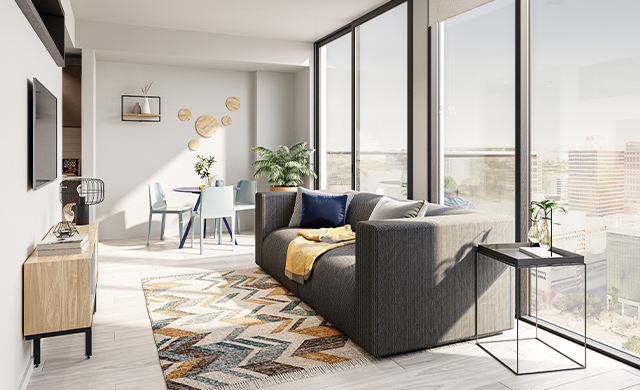 To that end, many of the swanky, lounge-like spaces have multiple functions, encouraging residents to stop and chat—even the mailboxes have been designed to feel like furnishings in an exclusive club. An art installation made with climbing ropes in front of a verdant living wall, for example, adds a sense of energy and excitement. “Our inspiration was to make this feel like a residential hospitality experience,” Kline says.

The first residents arrived in May, and the building is quickly filling up. As a response, five other Society Living locations are in development with more to come. “We have ambitious goals,” Shear adds. “Society is a new, young brand, and we’re excited about it.”

Inspired by his time interning with veteran hotelier Chip Conley, Ross Walker realized he wanted to retool the traditional hospitality model and create a different type of experience. In 2012, he started looking for real estate assets in urban locations that could be converted into community-based housing options for students and schools. He soon realized the model also worked for young professionals who wanted the same thing at an affordable price.

Walker, who is managing partner at real estate group Hawkins Way Capital, which owns and operates Found’s properties, says the brand is making a splash in the co-lifestyle space because of its three-spoke business model. In addition to its co-living Found Residences, the company offers Found Hotels and Found Study, an upscale dormitory-style housing product that’s geared toward college students. “We call it multifamily and hospitality 2.0,” says Walker. 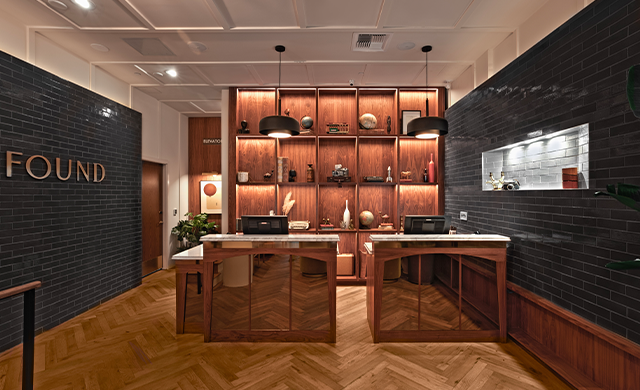 With 4,000 beds in 14 cities, including San Francisco, Boston, Miami, and Chicago, a defining characteristic is its streamlined approach to design. Collaborating with John Terzian of the h.wood group, each location is rooted in a midcentury style with subtle accents of contemporary and Hollywood Regency looks. “We have a very simple, stylish design that offers all the essentials that you’ll need,” Walker says.

“To have this physical network existing today under one aligned umbrella is a very unique and competitive advantage,” he continues. “We built our business from the bottom up, and that puts us in a strong position to capitalize on opportunities that lie ahead in what may be a significantly distressed real estate market.” 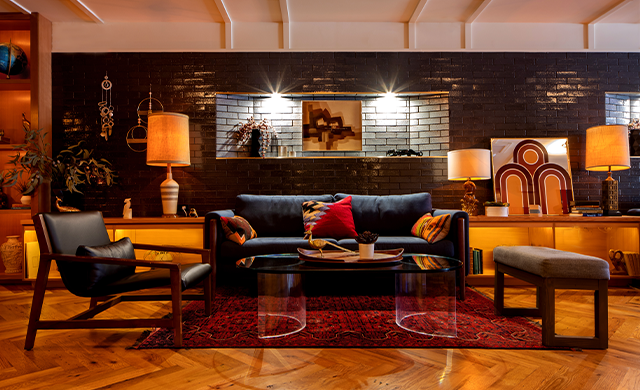