HOSPITALITYDESIGN: Formula of the Longterm Partnership of Entourage Group and Studio B+K

An Amsterdam-based F&B operator and a Tel Aviv-headquartered design studio may not seem like the most obvious longterm bedfellows, and yet, for more than a decade, Entourage Group and Baranowitz + Kronenberg (B+K) have partnered extensively across a host of restaurant and bar projects. The relationship has expanded from pioneering concepts in the Dutch capital that fundamentally changed the city’s hospitality landscape to an abundant international portfolio—often in collaboration with European Hotels Private Collection, with which Entourage Group has an ongoing partnership.

Momo, an Asian-fusion restaurant and bar that celebrated its 10th-anniversary last year, was their first joint venture. “We were lucky because we entered Amsterdam at a time when the city was ready for change,” says Irene Kronenberg, who cofounded B+K with Alon Baranowitz. “It wasn’t only about food, but about creating a social hub that would function from day to night.”

“B+K understands the customer journey extremely well, and we share a vision,” says Yossi Eliyahoo, cofounder of Entourage Group, alongside Liran Wizman. “Our conversations led to an innovative design, and from our shared feedback, we delivered a better experience.”

The success of the restaurant cemented the synergy between both parties, who subsequently worked together on Izakaya, Mr Porter, and the Duchess, all in Amsterdam, and then collaborated on expanding the concepts beyond the Netherlands. “The partnership has been so enduring because, even when translating an existing concept for a new location, we start with a clean slate,” says Baranowitz. “Momo was the cradle, but we continue to approach each brief and, in many ways, the relationship anew.”

Izakaya
Japanese restaurant concept Izakaya has become one of Entourage Group’s most prolific brands, blossoming from the first Amsterdam site to locations in Hamburg, Munich, and Ibiza. A fifth in Milan is slated to open in 2021. “We never planned to take Izakaya international,” says Eliyahoo. “We never copy and paste. We keep similarities, but each is a completely different, tailor-made experience.”

Izakaya Ibiza opened in 2017 at Sir Joan with a maritime-inspired design. “[Ibiza] has been perpetually conquered by so many cultures, and we decided to follow the modern conquerors who arrive onboard their yachts every season,” says Kronenberg.

Adds Eliyahoo: “I always approach restaurants with a very clear standalone identity that attracts locals, as well as visitors who want to be where the locals are.”

Mr Porter
The Mr Porter steakhouse concept was born at the W Amsterdam with the aim of uniting the worlds of dinner and the sinner. In June, a second Mr Porter opened at Sir Victor Barcelona, spread across the hotel’s ground floor. For its design narrative, “one of the insights that sparked our imagination was the story of Caterina Albert I Paradís, the renowned Catalan writer who had to use masculine pronouns to publish her work,” says Baranowitz. “The notion of pretending to be someone you are not in order to express yourself resonated [with us].”

Barcelona’s location, between the mountains and the sea, was also a distinct point of reference, particularly in relation to color. “While the street side serves as an allegory to the sea­—the end of the public spaces—where Mr Porter is located, represents the mountains. Colors, textures, and flooring gradually shift from light to dark and warm earthy tones throughout,” says Kronenberg. A 360-degree bar encourages guests to interact, while copper mesh chandeliers float above the central seating area. Metal curtains line the walls, intended to provide a sense of tension between the worlds of uncompromising Catalan craft and industrial modernity.

The Duchess
In many ways, the Duchess in Amsterdam is not only a departure for Entourage Group but perhaps the jewel in its crown. A sprawling Michelin-starred fine dining restaurant in a historic former bank, it speaks more to traditional grandeur than slick modernism. Located in the main hall of the building, stained glass windows adorn the ceiling, where chandeliers hang canopy-like above diners. Contemporary flourishes, including LCD screens in ornate frames that display a mix of static and video artwork to a metal origami back bar designed by Tel Aviv-based artist Ilan Garibi, seamlessly integrate into the design.

As one of Entourage Group’s brands, it is, on first appearances, the least ripe for replication, but B+K is already working on the second location, set to open at the upcoming EDITION Milan in 2021. “The Duchess is not a chain, and so, from a design perspective, can’t be visually or conceptually developed as a chain would be,” says Kronenberg. “Milan will represent the second of what will be a collection. We will reference the original [only] to understand the energy and experience and how that can be translated. If you have something with great DNA, you can take it to other places without repeating yourself.” 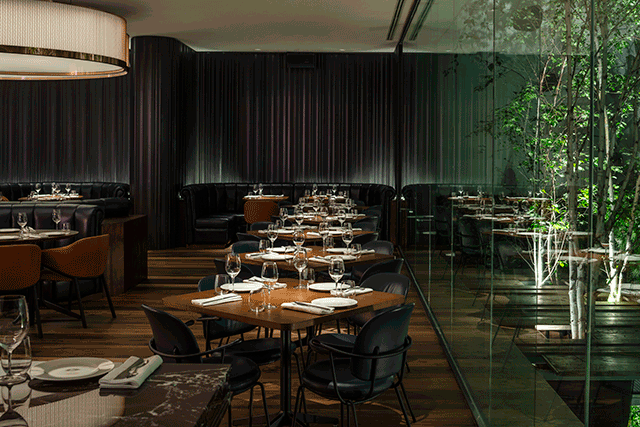 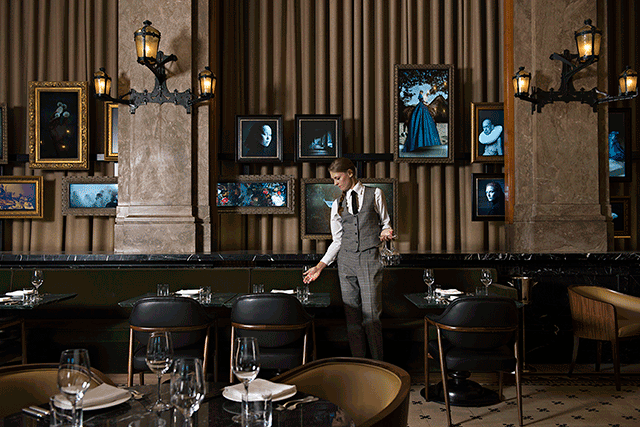