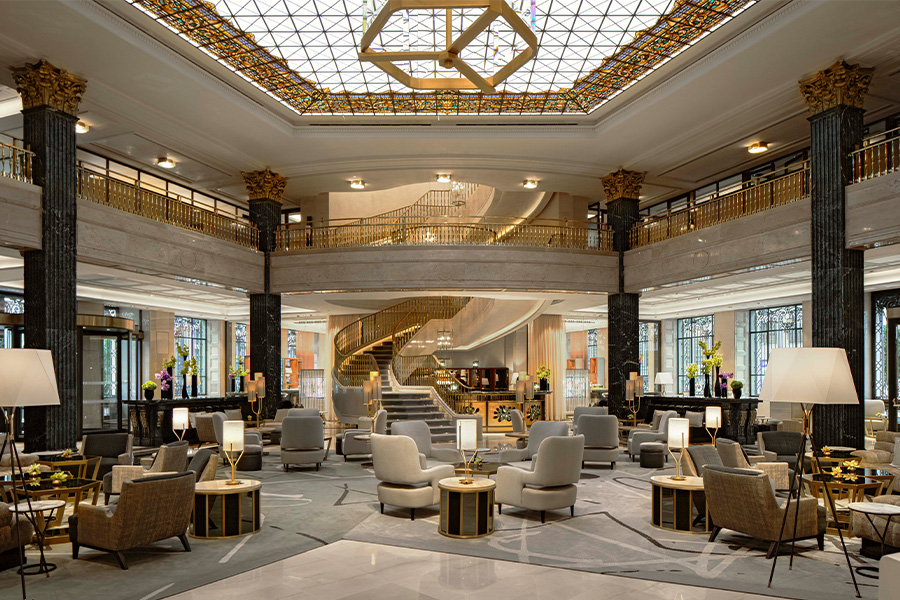 Nearby Madrid’s buzzy Puerta del Sol public square lies Centro Canalejas—an urban redevelopment project led by Spain-based architecture firm Estudio Lamela that comprises seven adjoined historic buildings, the oldest of which dates back to the late 19th century. The structures, which had been left vacant for 15 years until the seven-year revitalization began in 2012, are now home to more than 160,000 square feet of retail space, 22 luxury homes, an expansive underground parking garage, and the Four Seasons Hotel Madrid.

The luxury hotel spans four levels of the connected buildings and features 204 guestrooms and suites, a three-story spa and fitness room, two ballrooms, and more. Designed by San Francisco-based studio BAMO, the interiors were just as meticulously renovated and revitalized as its exterior. “With an architectural backdrop rich with historical details, you must bring in a touch of today to complement the past,” says BAMO lead designer Lindsay Noelting. Four Seasons Hotel Madrid spans four levels of the adjoining buildings, which resulted in a total of 118 different guestroom types

With the help of the historic committee, more than 16,000 historic elements were cataloged and conserved during the project, and approximately 3,700 were incorporated upon completion. The team honed in on a vision characterized as “contemporary classicism and youthful vibrancy with Spanish flair.”

This directive led to creating custom modern furnishings to complement historic doors and antique pieces, installing contemporary artworks and employing bold new moments throughout the hotel. “We often coordinated new materials with original worn stones, restored metal work, and antique door hardware,” says Noelting. “Our job was to ensure elements that were original could be identified as such, while creating a sense of cohesion.” The lobby’s grand staircase, for instance, features repurposed brass banisters and contrasts angular aspects in the space with a sensuous, flowing design envisioned by BAMO principal Steve Henry. Each of the colors woven through the design were thoughtfully selected to represent Spain. Inspiration was pulled from the work of late Spanish painters Francisco Goya and Diego Velázquez, while muted earth tones found throughout the country’s dry landscape were honored in the lobby and public spaces. A nod to Spanish high fashion comes via saturated olive green, saffron, and gold hues. This locally driven approach was also applied to material selection. “The design is sympathetic to historic elements, yet allows contemporary attitudes to have their place,” adds Noelting. “The collision of old and new creates lovely, layered, and timeless scenes.”