After Marriott’s acquisition of Starwood Hotels & Resorts in 2016, the mega hotel company reevaluated its roster of 30 brands. Identified as serving similar audiences, Marriott’s Renaissance Hotels and Starwood’s Le Méridien each needed a facelift. While the latter is now focused on the glamour of travel, Renaissance went back to its roots. “The brand was initially built on the promise of discovery,” says vice president of global brand management and marketing George Fleck, who spent 15 years at Starwood before joining Marriott in late 2016. “Travelers want to feel like they’ve been somewhere—that they experienced the DNA of the neighborhood—but they still want the quality of service at a hotel.”

The brand’s immersive expansion isn’t confined to only one market or one design style. Properties, in emerging neighborhoods, exotic locales, and even next to major transportation hubs, are being revamped with locally minded details top of mind. “We solidified our design ethos to be a payoff around spontaneous discovery,” says Fleck. Here, we see how the brand is cementing this creative shift in three different markets.

Urban Oasis
After infusing the Renaissance Republique in Paris with an urban-bohemian feel, designer Didier Gomez was called on once again for the city’s Place Vendôme location. Tasked with translating the neighborhood’s luxurious, high-end aesthetic into the charming Renaissance Paris Vendome Hotel, Gomez used alabaster flooring, leather, and surrealist art to add a sense of modernity, while door frames, interior shutters, and antique carpets and lighting all pay homage to the past. “The idea was to make the space bigger and more unified with a strong identity,” Gomez says. 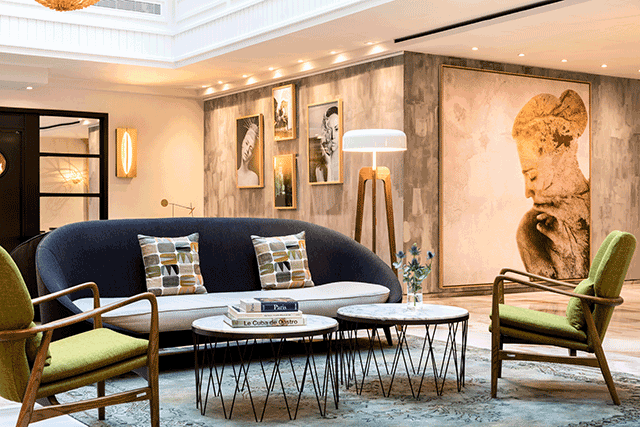 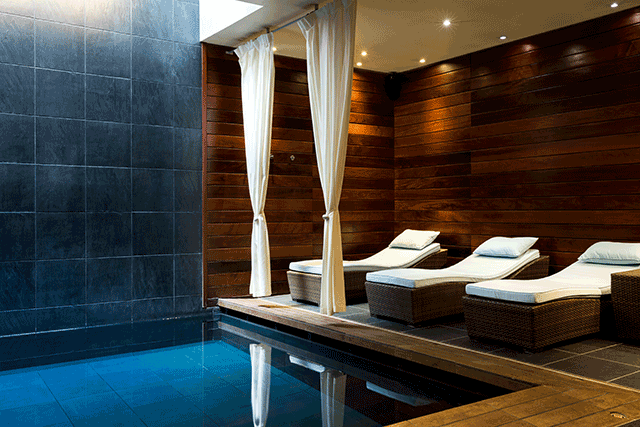 The indoor swimming pool at the Renaissance Paris Vendome

In New York, the upcoming Stonehill Taylor-designed Chelsea property resides above a former antique garage and is characterized by abundant greenery, a tribute to the neighborhood’s historic flower district. For its Harlem counterpart, local firm AJC Design will celebrate its neighborhood when it debuts in 2020 in the former Victoria Theater. Naturally, the design was inspired by “the excitement of attending the theater,” says principal Alicia Cannon, noting that antique mirrors, matte black finishes, and jewel-toned fabrics are peppered throughout. “Its polished glamour encourages guests to never forget [the building’s] heady, triumphant past.” 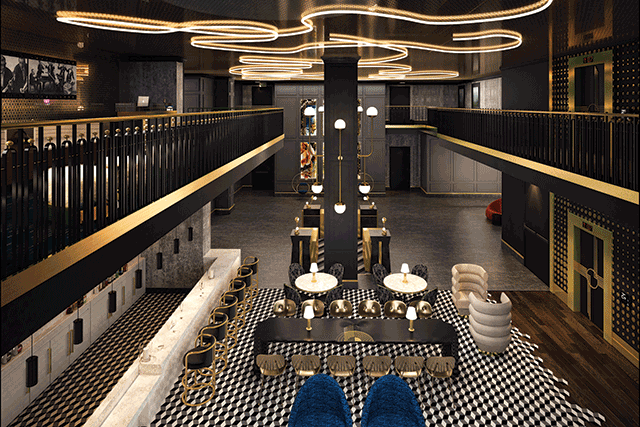 Brass details abound in the lobby bar at the Renaissance Harlem, shown in a rendering Cymbals will line the black and gold elevator vestibule at the Renaissance Harlem, shown in a rendering

Meantime, the recently opened Renaissance Nashville by Dallas firm Premier Project Management transformed an outdated hotel in a contemporary hospitality experience that “embraces the refined aesthetic language synonymous with the Renaissance brand, while recognizing the city’s renowned music scene,” says Carla Niemann, senior vice president of design and architecture. The design celebrates Nashville as the cultural hub of the South with a sumptuous color palette and daring art installations, including one composed of natural denim stripes, embellished with gold and silver leaf. 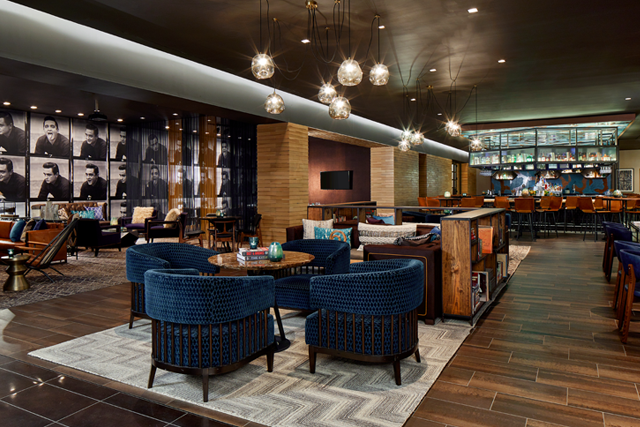 Tranquil Retreats
For the brand’s first Mexico hotel, Mexico City-based Estudio Lemus Arquitectos and Idea Asociados conceived the design of the Renaissance Cancun around Mayan mythology, notably at arrival, where guests are greeted by a wooden sculpture that represents a sacred Mayan tree. Contrasts in materials and textures define the 180-room property, allowing for “spaces to be fun, but also functional and timeless,” says Idea Asociados general director Agustin Caso. 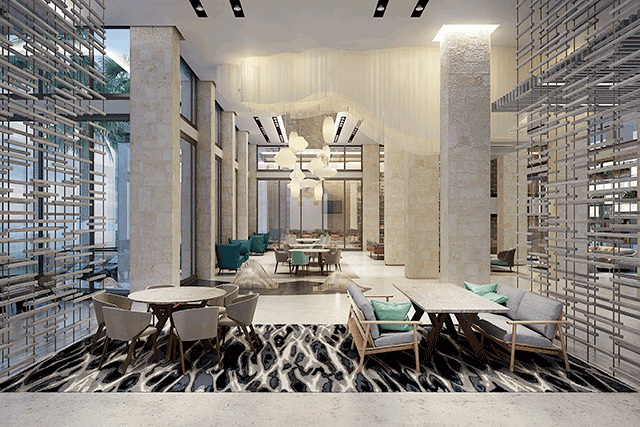 On the opposite side of the globe, the Renaissance Bali Uluwatu Resort & Spa, with interiors by EDJ America, highlights views of the Bukit peninsula. Informed by the landscape, the 207 guestrooms feature private balconies, while the pool bar overlooks the ocean and outdoor venue Uluwatu Deck encourages guests to party under the stars right next to the coastline. “It’s rooted in the story of the natural surroundings,” says Fleck. “There are a lot of open spaces, and you can see every part of the peninsula.” 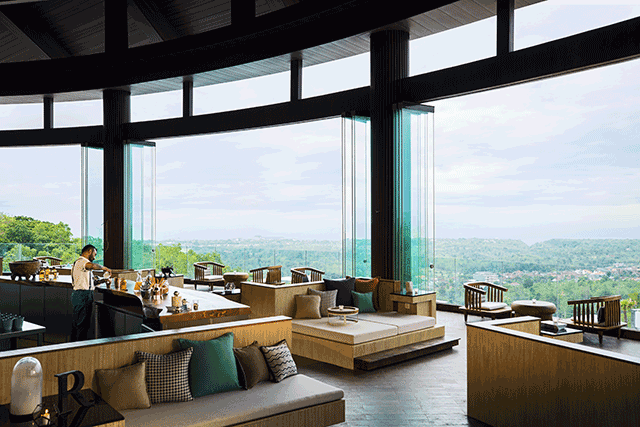 Transportation Hubs
Renaissance has carved out space in its vast portfolio for the burgeoning airport hotel market, from a Warsaw location by Polish firm JEMS Architekci that is filled with native textiles to evoke the 1930s and ’60s, to the art-infused property in Atlanta by Rottet Studio. “Airport hotels typically serve a function,” says Fleck “but why shouldn’t the lobby be buzzy and engaging?”
At the Renaissance Los Angeles Airport Hotel, Hydee Hirschmann, principal of Los Angeles-based CRA Design, was given direction to “make it LA but don’t be cliché,” she says, adding that she took cues from the entertainment industry, going for a more nuanced feel rather than an on-the-nose tribute. A coworking area, for example, features a wall of album covers. “It feels like the private space of a successful music or entertainment startup,” Hirschmann says. “We wanted to leave the guest with an authentic LA experience the way we know it: multidimensional, diverse, eclectic, inspiring, and entertaining.” 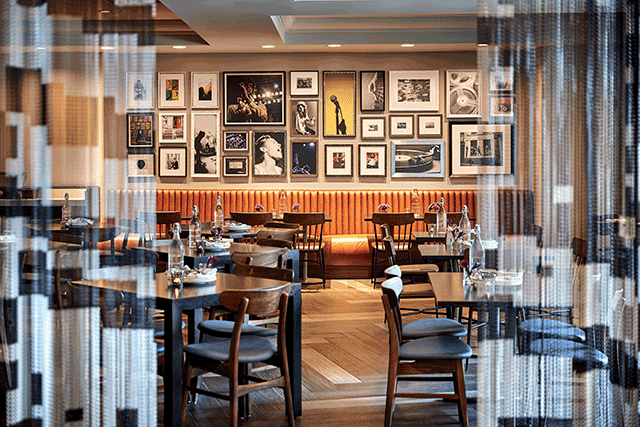