America’s most dramatic district has also been a hotbed for development. Among the recent openings are a handful of design-forward properties, including the refined Conrad Washington DC by Houston-based Rottet Studio and Swiss firm Herzog & De Meuron, the debut of activist hotel brand Eaton Workshop (by New York’s Parts and Labor Design and Gachot), and Sydell Group’s LINE DC (a redo of a church by INC Architecture & Design). Still to come: the renovation of Rosewood Washington DC from local designer Thomas Pheasant and citizenM’s maiden property in the capital, designed by Amsterdam firm Concrete.

Noble materials make up the lobby at the Thompson Washington DC

The new-build property from owner Geolo Capital and operator Davidson is located in the city’s 42-acre waterfront development the Yards. For the design, Parts and Labor Design brought together two distinct narratives. The first was to create a gallery-esque trail of architectural expressions that celebrate an “art as an object” methodology—seen in the lobby, where the team crafted the bar as a sculpture that centers and unites the room. 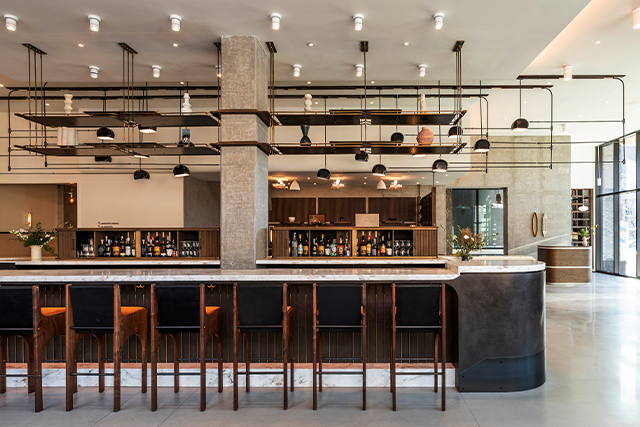 Second, the designers wanted to pay homage to the nautical influences of the surrounding area, referenced in the lobby’s weathered wood and glass partitions and in rope details in custom light fixtures that lend an industrial feel. “We wanted to embrace the community and the current growth DC is seeing in development and design, while celebrating the heritage of the area and remaining true to a sense of industry that’s rooted there,” says design director Danu Kennedy. The 225 guestrooms have a colonial feel and reference ship cabins, but the standout is the penthouse, which has two separate bars—one darker and moodier, the other light and airy—to represent below and above deck atmospheres, respectively. 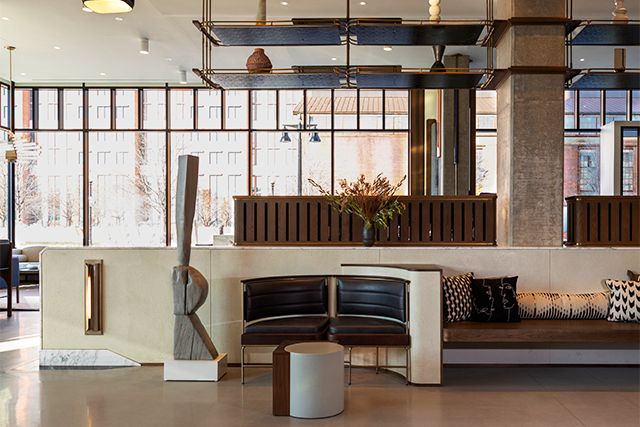 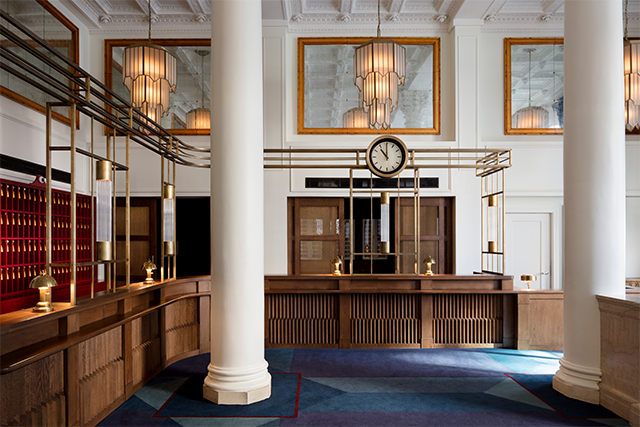 Found in the trendy Penn Quarter neighborhood, the 181-key Riggs Washington DC is housed in a historic building once home to the Riggs National Bank, also known as the Bank of Presidents. Jacu Strauss, creative director at New York-based Lore Group, says he “didn’t want to restore the building so that it lost its wrinkles. We wanted to preserve them to celebrate their age and history.” Now a city landmark, guests are introduced to the property’s grand scale in the original barrel-vaulted lobby, which also includes a medallion honoring Juno Moneta, the Roman goddess of money. The money motif continues in the lower-level former bank vault-turned-Silver Lyan bar and the guestrooms, where minibars recall bank safes. 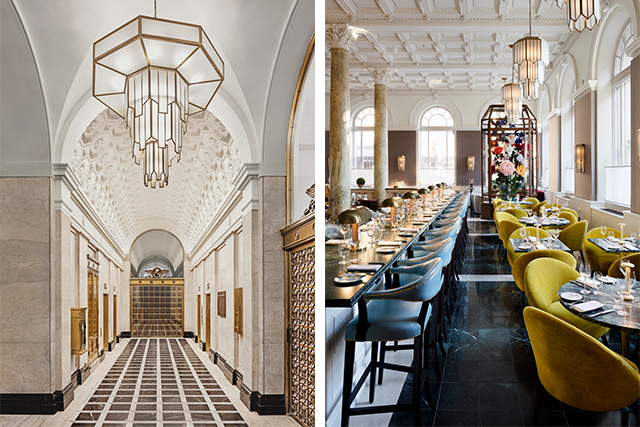 The grand scale of Riggs Washington DC is revealed in its barrel-vaulted lobby, while Café Riggs boasts a yellow and blue color palette 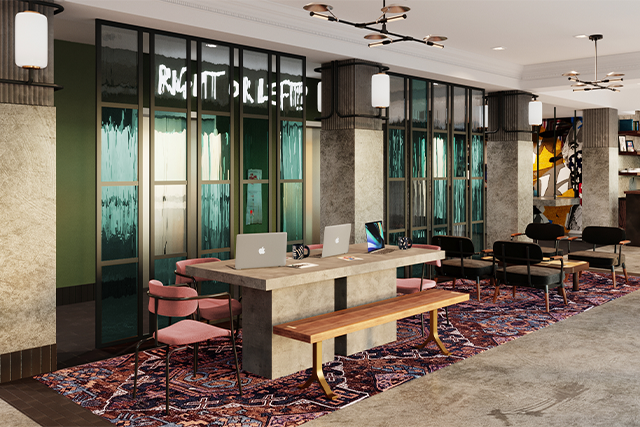 The affordable hostel brand continues to grow its U.S. presence with a DC outpost that serves as a creative hub in the city’s Dupont Circle neighborhood. Dallas- and New York-based Studio 11 Design was responsible for the interiors and “brought to life Generator’s distinctive ethos with an artful twist that challenges the destination’s sensibility,” says cofounder and principal Kellie Sirna.

Lou Verne, the firm’s in-house creative consultancy, created nearly 750 pieces of guestroom art that are “a twist on a different political intrigue of centuries past,” she says, paying tribute not only to the city, but also “portraiture as a genre, with a daring flair aligned with the brand.” Playing supporting roles in the 148 guestrooms are overstuffed headboards and comfy-cool furnishings in a palette of stone, black, and deep fuchsia with touches of yellow, while the shared rooms feature an ultra-minimalist aesthetic. “[It was a challenge] creating cheeky moments of discovery and opportunities for private time,” Sirna says. “This approach provides guests with a sense of having their own space and private art gallery.”