HOSPITALITYDESIGN: When a Londoner and New Yorker Collaborate for Impeccable F&B Design

Founded by Des Gunewardena and David Loewi in 2006, D&D London was an established restaurant group in the UK capital when they embarked on their first project in Manchester—a rare rooftop space in the city—in 2018. Intrigued by CetraRuddy’s design of another London rooftop, SushiSamba, they sought out the New York firm to spearhead 20 Stories. The courtship proved fruitful, leading to more work, including D&D London’s debut New York restaurants, Bluebird London NYC and Queensyard. In addition to the obvious chemistry between the design firm and ownership company, what makes this relationship standout is the perfect choreography of pairing thoughtful design details with clever, often irreverent, moments.

“Great design comes when you have an intelligent, creative, and also pragmatic dialogue between the designer and the client,” says Gunewardena. That often means knowing and fighting for what works. “We want it to look great in 10 years for our clients, and that can only happen with a very close collaboration between the owner-operator and the designer,” says Nancy Ruddy, CetraRuddy’s founding principal and executive director of interior design.

“When you find someone who has shared values and understands what’s important to you, then you develop a shorthand,” she adds. “One of the exciting things about working with D&D London is that we’re both passionate about what we do. It’s not just about business, it’s about excellence. When you’re dealing with people who have a similar sensibility and are loyal and committed to you, it makes it easier [to create amazing projects].”

20 Stories
The biggest obstacle of 20 Stories was crafting a design-led restaurant that would still honor Manchester’s heritage. “It’s a very strong city in its own right,” says Gunewardena. “We were conscious we needed to create something different—not something that looked like it was derived from what we’d done in London. That was one of the reasons we liked working with CetraRuddy; they weren’t UK designers.” It was the first time for both firms to work in the city, which proved to be an advantage for Ruddy. Hailing from New York, she had no preconceived notions or expectations and was able to translate that into an interior that evoked a sense of discovery and awe. “There was this challenge to do something that was glam but also comfortable and welcoming,” she says.
To counterbalance the building’s modern glass metal façade, Ruddy’s team envisioned a garden in the sky that gives way to Manchester’s skyline. Guests are welcomed by a showstopping tree-like structure made of metal—a standout in the otherwise restrained restaurant. “As you sit at the bar, you look out at the beautiful view and garden, but you also feel like you’re sitting under a tree in the middle of a forest,” she says.

Bluebird London NYC
After the success of 20 Stories, Gunewardena and Loewi decided to expand their empire to New York. First to open was Bluebird—a mainstay in London’s Chelsea neighborhood. To recreate an existing concept and tailor it to Manhattan as the Bluebird London NYC required Ruddy to produce moments that were city-specific yet tinged with a certain British flare.

Residing on the second floor of the Time Warner Center in New York’s Columbus Circle, Ruddy conceived an updated take on London’s Mod era with lots of colors, patterns, and British artwork.  Unlike traditional steakhouses that are heavily infused with dark brown and leather, Bluebird conjures up something “a bit more voluptuous,” says Gunewardena. Take the Miss Bluebird bar. Wrapped in Plexiglass, it represents a 1960s woman with a ponytail, revealing something more upbeat and energizing, “with a British sense of whimsy,” says Ruddy. “It’s inspiring to sit there during the day because it’s a different kind of environment than what’s found in London.”

Queensyard
Six months after Bluebird opened, Queensyard debuted at Hudson Yards in March with Thomas Heatherwick’s Vessel serving as a dramatic backdrop to interiors inspired by an eclectic English country home. “As soon as you walk into the space, you feel its energy,” says Gunewardena, pointing to a convivial bar area that greets guests upon arrival.
Foregoing kitsch for cleverness—you won’t find Union Jack flags or red telephone booths here—Ruddy’s team approached the design by merging the cultures of the two countries. A massive fresco of Queen Victoria scales a wall in the private dining room, while photos of Freddie Mercury and a portrait of Queen Elizabeth by Andy Warhol are found throughout. “We looked to incorporate a lot of different references, but not in a corny way,” she says. The venue flaunts other tongue-in-cheek moments, including two Georges Seurat-inspired murals by American artist Sarah Moore that bookend the dining room and depict a British landscape clad with irreverent details, like Victorian men in Speedos. “One of the greatest pleasures for me,” says Ruddy, “is that when Des walks into a space, he gets this twinkle in his eye and you know that he’s laughing inside.” Queensyard’s interiors are inspired by an eclectic English country home 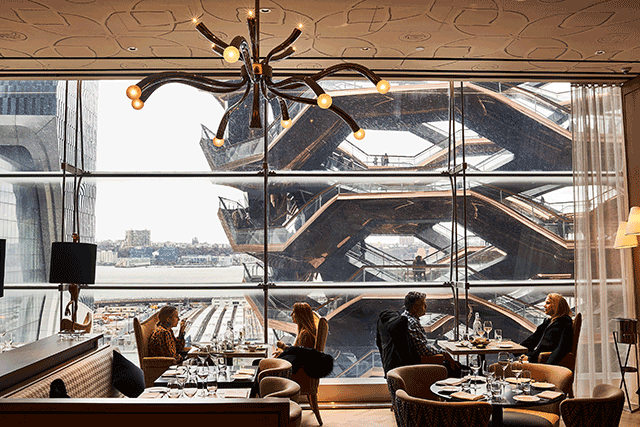 Thomas Heatherwick’s Vessel serves as the backdrop to Queensyard 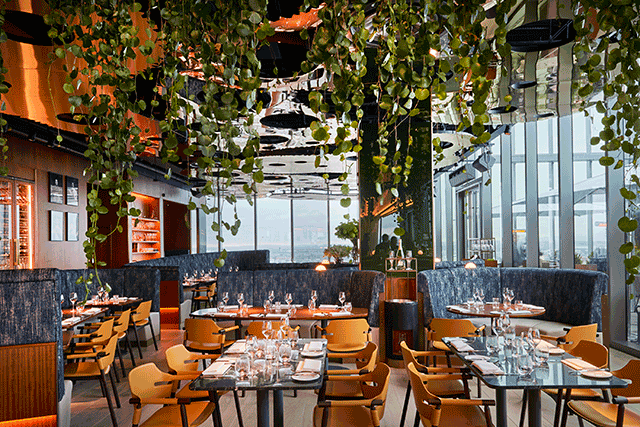 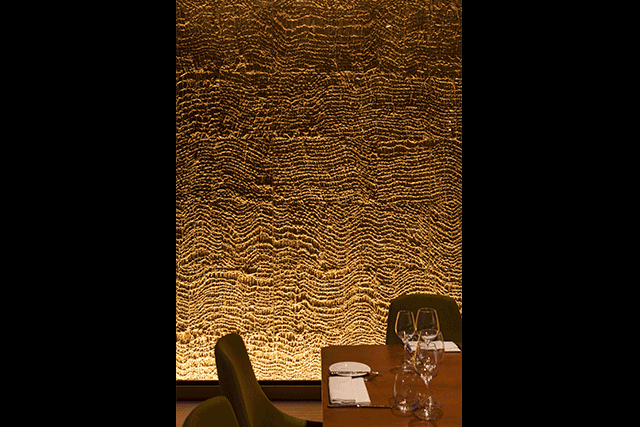 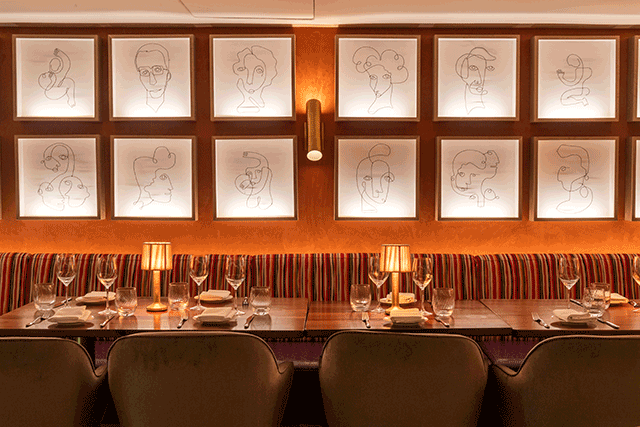 The artwork at Bluebird London NYC adds a dash of whimsy