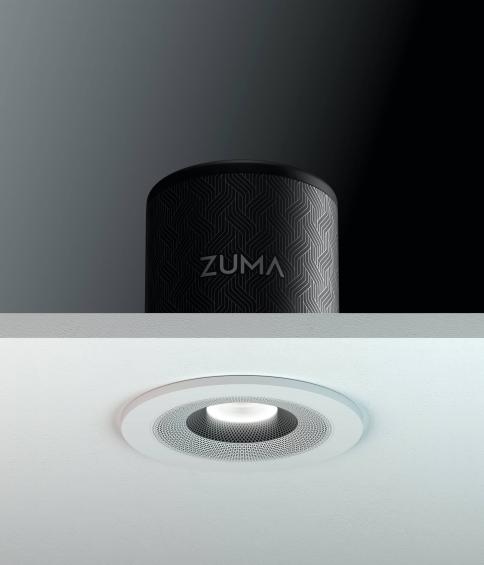 Zuma is a bold new British start-up that promises a seamless combination of sound and light. Like the paperless office, the wireless home turned out to be a hollow promise. How many delightful devices have you seen advertised in their cord-free altogether? The reality is that a tangle of cables is required to get the device up and running once in the real world. The speaker designer Morten Villiers Warren came up against this conundrum during a recent house remodel. ‘I thought it was extremely complicated,’ he explains from Zuma’s pop-up store in London’s West End. ‘All the ceiling speakers and cabinets full of equipment – it was hideous. I thought there had to be another way.’

Warren embarked on a year-long programme to create an alternative. Throughout his career, the designer has worked on some of the most iconic freestanding speaker designs on the market, including products like the horn-shaped Emphasis and the Nautilus for Bowers & Wilkins. With plenty of acoustic experience, Warren highlights the fundamental problems with ‘prescriptive’ speaker systems. ‘They take up so much space, and you have to sit right in the middle of the soundscape to get the perfect image. Personally, I want to sit anywhere and listen to music, or move around.’

A cutaway view of Zuma’s Lumisonic speaker and light

Zuma is the result, a multi-functional system that’s designed to de-clutter your space while simultaneously expanding your sonic horizons. ‘I wanted to find a way of having audio everywhere in the house without adding to the chaos,’ he says, ‘and then I thought of the GU10 light fitting – the standard recessed ceiling downlighter. There are apparently six billion of them in the world.’ With a team based in the UK and LA, including the former Chief Technology Officer at Hive, Warren developed Zuma’s debut product, the Lumisonic. So-called because it occupies the space taken up by the original downlighter, yet also contains its own high-grade lighting system, Lumisonic is a compact ceiling-mounted speaker with incredible range and clarity.

A huge amount of effort has gone into creating the bezels – the only visible part of the system – so that you can chose the most suitable finishing touch for your space. Zuma is also future-proofing the system by introducing a range of ‘smart bezels’ that incorporate additional functionality, including motion detectors and smoke and carbon monoxide detectors. The finishing touch is that when you move, you can take it all with you, rather than a more traditional ceiling speaker system, which tends to be expensively plumbed in and very much a permanent fixture. ‘It’s all tailor made,’ Warren says of the compact enclosure, which neatly packages the driver, circuitry and components into a stubby cylinder designed to slot neatly into an existing GU10 fitting. ‘The aluminium speaker cone is made in Shoreditch,’ he explains, ‘we couldn’t find anywhere else to build it to our specifications.’

Designed to work as wirelessly connected of individual units – the company recommends around four – the device conjures up a vivid and expansive soundscape. Like practically every speaker system on the market, the Lumisonic lights are operated through an app and dovetail with your existing sound sources, whether over Bluetooth or Wireless. Your phone, television, or existing hi-fi equipment can all be piped into this discrete, practically invisible system, as well as the usual personal digital assistants.

The sound quality is hugely impressive, with a three-dimensional clarity and volume that is immersive and resonant, despite the absence of a traditional subwoofer. ‘It’s a bit like listening to the audio in a high-end car,’ says Warren, who has indeed worked on several car audio systems for manufacturers like Bentley. By installing a set of Lumisonics in every room, you can divide the house up into different sonic zones or have everywhere playing the same tune. The light is produces is 90-rated on the CRI – Colour Rendering Index – scale, which means it’s professional grade and suitable for museum or studio installation.

The Lumisonic offers a huge variation in light intensity and temperature

Combining light and sound has other advantages. A ‘wellbeing’ section of app will dim the lights and play a choice of soothing ambient soundscapes. The system is even certified for use in bathrooms. Warren is keen to stress that Zuma – which will sell direct to consumers – is about high quality, low hassle, and excellent customer service. Installation will be undertaken by the company’s dedicated team, and there are already talks of link-ups with architects; the Chief Executive of Zaha Hadid Architects, Mouzhan Majidi, has just joined the company’s advisory board. ‘Speaker design hasn’t really changed in 70 years,’ says Warren, ‘because our system is also a light, we are very a part of your home. We want Zuma to feel like it’s part of the family.’ §